While the maker and publisher of this lithograph remain a mystery, we do know something about its subject. Jacob Black was one of the most successful iron masters in Clarion County. In 1833, he built a furnace a few miles southeast of Shippenville with his brother-in-law, Richard Shippen (whose family lent the town its name). It was a large operation, employing up to seventy men and shipping as much as 1500 tons of iron a year down the Clarion and Allegheny Rivers to Pittsburg. In 1859, the furnace blew out, but by then Black owned plenty of other business to keep his head well above water, including part of another furnace, a forge, a gristmill, and a sawmill, with fifteen hundred acres of timber to keep it running. He also held large tracts of land in Clarion, Elk, and Beaver Townships, which he began to drill once the oil boom reached Clarion County in the later 1860s. By the time this lithograph was drawn, as can be discerned by the inscription, oil was Black's major enterprise. 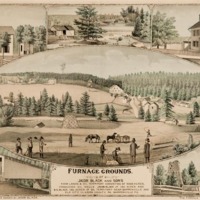