A View of Reading

A View of Reading

Not a great deal is known about F. A. Holtzwart, other than that, as a lithographer in the firm of Lehman & Duval, he was a skilled enough at his trade to be entrusted with drawing his own view of Reading onto the stone. The two churches in the center of the composition are Trinity Lutheran Church, built in 1791, and, to its right, the First Reformed Church, built in 1823. Both are still standing. The body of water that appears here to be a small lake is actually the Schuylkill River, and the covered bridge spanning the river to the left is the Harrisburg (Penn Street) Bridge, constructed in 1818. 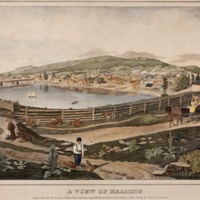