From volume II of Picturesque America

In June 1872, the publishing firm D. Appleton and Company sent its agents out across the country to solicit subscriptions for its ambitious Picturesque America. Already under production for several years, the prospectus for the project promised “a complete description and elaborate pictorial illustration of the greater part of the North American Continent.” Once completed, the two-volume text included, in addition to dozens of essays, over nine hundred wood engravings and forty-eight steel engravings. The book was issued in parts, with each subscriber receiving a twenty-four-page section every two weeks. Volume I was completed in 1872; volume II in 1874. Once all the parts had been received, D. Appleton offered a variety of binding possibilities, from cloth to Moroccan leather, for joining the parts into book format.

For such an ambitious project, a large pool of artists was needed to design and engrave the images. Robert Hinshelwood contributed the largest number of steel plates: a total of twenty-three over the two volumes. Here, working after a drawing or watercolor by Granville Perkins, he offers a truly picturesque view of Philadelphia from the Belmont plateau in West Fairmont Park. Spanning the Schuylkill River in the distant mid-ground is the newly constructed Connecting Railroad Bridge, which opened in 1867. 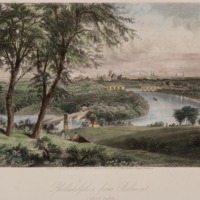 Robert Hinshelwood American, b. Scotland, 1812–after 1875 After Granville Perkins American, 1830–1895 Published in 1874 by D. Appleton and Company, “Philadelphia from Belmont,” Palmer Museum of Art Previous Exhibitions, accessed May 24, 2022, https://gallery.arts.psu.edu/items/show/57.