Explosion of the Alfred Thomas at Easton Pa. March 6th 1860

Explosion of the Alfred Thomas at Easton Pa. March 6th 1860

The Alfred Thomas, a ninety-foot steamer, was constructed in Easton in 1859 to navigate the Delaware River between Easton and Port Jervis, New York, transporting produce and passengers. On March 6, 1860, the ship steamed up river with about forty passengers. When progress through the rapids slowed, the engineer fired the boiler to 120 pounds per square inch, considerably beyond its designed maximum pressure. The subsequent explosion shook the town, and the forward part of the vessel was blown apart. Strangely, some who were thrown high in the air by the blast escaped relatively unharmed, while others were killed instantly. The tragedy, which resulted in eleven deaths and another fourteen serious injuries, ended the efforts to commercially navigate the upper Delaware.

James Queen likely sketched this scene on the spot shortly after the event took place, and then brought his drawings back to Philadelphia to be copied onto stone at Peter Duval’s lithography company. In accordance to traditional practice at the time, the stones (or possibly zinc plates, which had reportedly been in use by the firm as early as 1849) would have been prepared after Queen’s sketches by artists in Duval’s employ. In this instance, however, Queen may very well have worked the stones himself. In 1835, when he was just fourteen, Queen began his career as an apprentice at Duval’s company and remained associated with it until Duval’s retirement in 1869. He was well versed in all aspects lithography, including early color lithography—then called chromolithography—a process the company had been using as early as 1843. 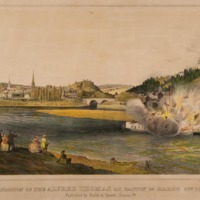