Twilight, Passage of the Juniata through the Warrior Mountain

Twilight, Passage of the Juniata through the Warrior Mountain

Fielding Lucas, Jr., was primarily a cartographer who not only drew but also surveyed a number of the towns he was responsible for mapping. Early in his career he worked with publishers in Philadelphia; however, in 1823 he opened his own publishing firm in Baltimore, where he became the first successful commercial mapmaker in that city. He also took on other publishing projects, such as the drawing book for which these prints served as illustrations. Although issued under his name, Lucas’ Progressive Drawing Book—essentially an instruction manual for artists—was the brainchild of John Hazelhurst Boneval Latrobe, who wrote the text and provided watercolors for the illustrations under the pseudonym E. van Blon.

The three-volume book contained a total of thirty-eight intaglio plates, of which seventeen were aquatints engraved by John Hill, who specialized in the medium. Thirteen of these were colored by hand, apparently before they were bound with the text for publishing. 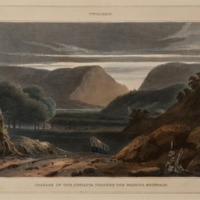