One week after graduating in 1926 with a degree in fine arts from Columbia University, Lynn Ward married May McNeer, a journalism student at Columbia (and the later the author of many of the books her husband would go on to illustrate). On the same day, the newlyweds sailed for Europe on their honeymoon, and eventually settled for a year in Leipzig, where Ward studied wood engraving with Hans Alexander Mueller at the Royal Academy for Graphic Arts and Bookbinding. Returning to the United States in 1927, he initiated what turned out to be a fifty-year career as an illustrator and graphic artist.

In 1929, inspired by Frans Masereels’ Sun, a 1919 novel told solely through a series of sixty-three woodcuts that he had encountered in Leipzig, Ward published his own wordless novel, titled God’s Man. Despite the Depression, the book, narrated only through its 144 wood engravings, became a huge success, selling more than 20,000 copies through six printings over the next four years. Five additional graphic novels ensued. The last, Vertigo, appeared in 1937. Turning away from a literary model, Ward then shifted, for much of his remaining career, to producing individual prints, which, like Flower Girl here, most often featured evocative landscapes based on the woods and farmlands surrounding his various residences.

Palmer Museum of Art, The Pennsylvania State University, Gift of Mrs. Francis E. Hyslop Jr., from her husband’s collection and given in his memory 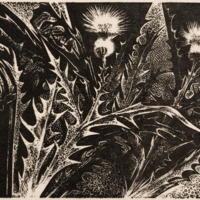