A native of North Manchester, Indiana, Daniel Garber first studied at the Art Academy of Cincinnati before moving to Philadelphia in 1899 to train for six years at the Pennsylvania Academy of the Fine Arts. In 1906 he travelled to Europe, where exposure to French impressionism influenced his palette and technique. When Garber returned to the United States in 1907, he settled in Lumberville, Pennsylvania, on the Delaware River a few miles north of the town of New Hope, which lent its name to a loose confederation of American impressionists that, in addition to Garber, included Edward Redfield, Fern Coppedge, and John Folinsbee.

Although perhaps best know for his painting—the Palmer Museum owns a fine example, titled The River Bridge, which is currently on view in the Hull Gallery—Garber was also an accomplished printmaker. The etching on view here accurately reproduces (though, of course, in reverse) a small painting of an old mill the artist executed in 1918. He painted the structure again in 1922, when he described it in his record book as, “an old mill on road to Carversville opposite auctioneer Anderson’s house.” We don’t know a great deal about Josh Anderson’s auction business today; however, Carversville, once a thriving farming community, still survives as an unincorporated village located just a mile or so southwest of Lumberville. 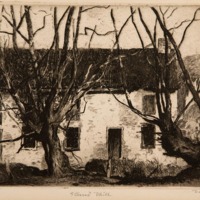