John Marin came to art relatively late in life. As a young adult, beginning in 1892, he practiced architecture, and rather successfully, though he never received formal training in the field. Only in 1899, when he was nearly 30 years of age, did he resolve to find a new career by enrolling in the Pennsylvania Academy of the Fine Arts, in Philadelphia. Three years later he was in New York, attending the Art Students League. At one point he developed an interest in printmaking, for when Marin sailed to Europe in 1905 to initiate a five-year period of study in Paris, his principal means of expression was etching. Indeed, during this stay he executed more than half of the 185 plates given to his entire print oeuvre.

Throughout his European sojourn Marin’s efforts reflected the realist tendency of the etching revival movement—championed perhaps most successfully by Whistler—to seek the immediacy of the visual impression. Not long after he returned to New York, an awareness of the sheer energy of the city, heightened through his prolonged contact with the Parisian avant-garde and more recently through the exposure to modernism he garnered from his association with Alfred Stieglitz’s 291 (where in the fall of 1910 he was given his first solo exhibition), encouraged a decided shift in his aesthetic toward expressionism. “I see great forces at work” he wrote in 1913, “great movements; the large buildings and the small buildings; the warring of the great and the small; influences of one on another. Feelings are aroused which give me the desire to express the reaction of these pull forces.”

Although by this time his preferred medium had switched to watercolor, Marin continued to voice this new approach in his etchings as well. Sail Boat, from 1932, is an excellent example of his attempt to convey the full range of dynamics resulting from the boat’s interaction with the wind and the waves in a single static image.

Palmer Museum of Art, The Pennsylvania State University, Gift of Mrs. Francis E. Hyslop Jr., from her husband’s collection and given in his memory 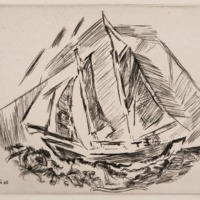