Located along the North Branch of the Susquehanna River, between Scranton and Wilkes-Barre, West Pittston (not surprisingly, due west of Pittston, just across the Susquehanna) lies at the heart of Wyoming Valley, a broad, crescent shaped lowland in northeastern Pennsylvania.

Curiously, many of the first non-indigenous settlers in the valley were not Pennsylvanians. They were from Connecticut, which as a colony laid claim to the upper third of Pennsylvania by way of its original land grant from Charles II. Unfortunately, Charles also deeded the same land to William Penn nearly twenty years later, so when the Susquehanna Company of Connecticut began to send settlers into the Wyoming Valley—including the area around Pittston and West Pittston—in 1762, the Pennsylvanians who already lived there, and who thought they owned the land, were not very happy. The action resulted in a series of conflicts, perhaps a little too ambitiously called the Pennamite–Yankee Wars, in 1769, 1775, and 1784. The dispute wasn't fully settled, in Pennsylvania’s favor, until 1799. 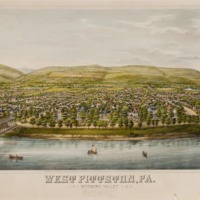